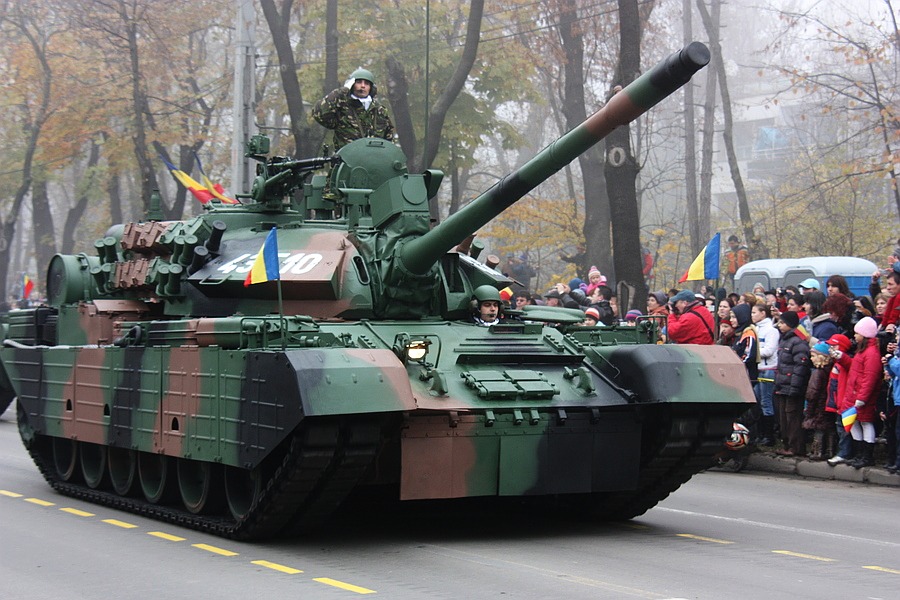 Until 1989 Romania’s Defense Industry had been an important economic sector, covering 85% of the procurement needs of the Romanian Defense Forces and contributing with allmost 1 billion US$ every year to exports, thus situating Romania among the top arms exporters in the world. Certaintly, compared to the local needs, the production capacities of the dozens of Uzina Mecanica [Machine Plants, literally Plant Mechanics] were oversized, in accordance with the external market opportunities. Equipped with eastern technologies, relatively modern for those times, the Romanian defense factories have had their foreign buyers among the Warsaw Pact and COMECON countries, but also among the African and Arab countries having special politic and economic ties with Romania. Within Defense Industry sector there were more than 200,000 well trained and disciplined employees, while the management was a centralized one.

Starting with 1990, following the structural changes in the world arms market and the politic economic and social transformation in Romania, this sector entered an increasing decline. The drastic decrease of the demand on the world market and lack of local orders, the low level of technology automation and labor productivity, associated with an unproper management were the main factors which have lead to this situation. Privatization was started, with some performant companies sold to private local investors.

Privatization of state-owned companies was at the heart of the political agenda in Romania in the 1990s and it has taken several forms, from the granting of ownership certificates to Romanian citizens, to tender procedures, to allowing privatization agents to selloff state-owned companies. At the present time, the privatization process is proceeding through three main channels: (1) privatization/liquidation through sales agents under the World Bank led Private Sector Adjustment Loan (“PSAL”); (2) direct sale of state enterprises by the Authority for Privatization and Management of State Shareholdings (“APAPS”) and (3) the privatization of national companies and commercial companies from the energy sector and the defense industry by the Office for State Participations in Industry (“OPSI”).

The degree of local military equipment production was underscored in October 1999 when Romania held its “first-ever arms trade fair.” Roughly two-thirds of the companies at the arms fair were Romanian (67 Romanian companies, 40 foreign companies). Local production, however, doesn’t always translate into sales. At the end of 1999, nine out of 10 Romanian arms producers had orders covering only 5-15% of their production capacity.

After more than a decade of decline, some other attempts of adaptation had been made with extremely limited results in converting the defense production capacities to civilian production or restructuring the sector. Since 2000, new steps have been made for finding a fundamental solution for the Romanian Defense Industry, such as: reorganizing and resizing the sector according to the real needs of Romanian Defense Forces and Romania’s potential place on the external market; conversion to civilian production, setting up industrial parks and other alternative solution; starting a gradual privatisation; search for strategic partenership with notorious Western companies; social protection measures for the employes and dismissed personnel.

The first step in reorganizing the sector was to put all the companies under the same ”umbrella”, by moving under the Ministry of Industry and Resources [MoIR] subordination the companies which formerly belonged to MoD. Not the actual level of local demands, which is very low, but the real estimated needs for the next 8-9 years of the national defense forces have been taken into account for redimensioning the sector. Given the actual lack of local orders, the survival of those estimated capacities is deeply related to exports, to creating mutually advantageous partenerships with the big foreign companies, and to attracting foreign or local investors – and thus to relaunching and modernising the production, making it more and more eficient, and finding its own niche on the world market.

Starting with January 2002, the implementation of a fundamental restructuring program began. The separation of the civilian production capacities and defense production ones, outsourcing of some capacities with setting up industrial parks coordinated by local authorities, and also the continued personnel reduction accompanied by specific social protection measures were the first steps made before starting the gradual privatization. The beginings of 2003 witness an intensification of privatization, with 12 companies on the list, including ammunition, vehicles, optoelectronics, electronics, airspace companies and a shipyard.

As of 2003 the Romanian Defense Industry encompassed 27 state-owned companies and one research institute. 15 of these companies and the institute are grouped within ROMARM National Company – a state owned holding tipe company. The remaining 12 state-owned firms were the independent companies on the privatization list. 11 other ones with specific defense production are private-owned stock companies under a formal coordination of the Ministry of Industry and Resources.

All the companies belonging to the Defense Industry Sector, together with other more than 20 private companies which actually can produce equipment or perform various services to the benefit of the Romanian Defence Forces have created PATROMIL, the non-governmental association of the Romanian defence producers. Romanian Business Association of the Military Technique Manufacturers “PATROMIL” was founded by the free consent of the founding members expressed during the assembly on 27.04.2001. “PATROMIL” is a employers association, lucrative purposeless, having full autonomy, non governmental state, apolitical, constituted on the criterion of the specific activity, respective defense industry, and based on the free consent of the founding members. The Association was constituted in order to protect and to promote the interests of his members by all legal means, before the public institutions, at the negotiation of the collective labor contract in. the framework of the social dialogues structures, as well as in any necessarily situations. The Association is a Romanian juristic person, constituted on the unlimited period.

The Association is the representative organism of the employers from the defense industry and it militate in favor of the organization’s reinforcement and of the employer’s solidarity, in order to maintain the good relations between these and with the view of the mediation as far as possible the eventual disputes, representing the employers’ legal and economic interests. The Association collaborates with other professional associations and similar federations from our country or abroad.

The Association keeps contact with the syndicates organized in the State Owned Companies, at the Federation level, and if it is necessary, with the salaried representatives from the commercial companies, employer’s members, in order to negotiate the collective work agreement on the branch level and to prevent, to mediate and to solve the work conflicts. Starting with March, 2003 PATROMIL became member of the Romanian Industry, Services and Commerce Patronate Confederation – CPISC, member of the Romanian Patronate Confederations Alliance – ACPR. Starting with 1 July, 2004 ACPR became associate member of the European Industrial Union and Patronate Federations (Union des Industries de la Communauté européenne) – UNICE.

Romania’s invitation to become a NATO member and its admission in the Alliance opened new perspectives for the Defence Industry of the country. Certainly, NATO membership obliged Romania to have small sized, flexible well-trained and modern equipped Armed Forces. Within this context, the basical co-ordinate of Romania’s Defense Industry Strategy was given by the transition axis from Eastern tipe procurement concepts and technologies to Western ones, which will enable the Romanian Armed Forces to become compatible with Allied military structures.

In this respect, the Defence Sector is supposed to adapt itself, in order to answer both the local market demands and also the political imperative which asks for maximal participation of the local companies in the fulfilment of the procurement programs drawn up for the National Defense Forces. Taking into account that the local market demands will aim at aquiring modern NATO standards equipment, the co-operation with notorious producers, ended in at least a partial production in Romania of the demanded equipment, must be the main direction in which Romanian Defense Industry has to move in the years to come. In order to strengthen the ability of the Sector to manage such an important task, an Offset Law has been promoted by the Romanian Government, stimulating the local companies to look for Joint Ventures and any other kind of partnerships with foreign companies. This process has already begun. Some Joint Ventures have been set-up with EUROCOPTER, DAIMLER-CHRYSSLER or other strategic partners and much more such partnerships are under discussion.

The Romanian Defense Industry, which was a dynamic and efficient economic sector of the country, still has an attractive potential for foreign and local investors and partners. This potential is given by its existing capacities, and especially by its capabilities. This sector has a bi-centenial tradition, and also highly qualified, well-trained, adaptable and disciplined human resources. Generally, the Romanian companies have been designed both for defense and civilian production. Converting the non-efficient capacities to civilian destination and strengthening the remaining ones through technology transfers and modernisations, associated with a performant, modern, market-oriented management, prove to be the twin-ended key for the future of this sector and an important challange for the investors.

The machine-building sector represents the major support of the Romanian economy, contributing to the development, modernization and maintaining of the other industrial sectors. In 1989, over 40% of the domestic production was destined to development purposes. The Romanian tractor-building industry was born and started to function soon after the Second World War when an aircraft plant in Brasov was restructured and then, by increasing the volume and the range of tractors within two other major plants in Craiova and Miercurea Ciuc. In 1989, the entire production of all three plants totaled 70000 units. Between 1989 -1992, the production totaled 25000 units/year out of which 50% was exported. Nowadays, the tractors continue to be manufactured in three big companies. Romania has its own tractor-building companies and assembly lines in several countries: Iran, Canada, U.S.A, Egypt. Demand of the tractor owners of spare parts is satisfied with the help of the warehouses owned by S.C. Tractorul UTB S.A. Brasov in many countries such as Austria, Canada, and France, while in other countries such as Denmark, Sweden and Guatemala, through the system of goods in consignment depots.

After 60 years of automotive tradition, Romania, with an optimal positioning in Central and Eastern Europe for increasing demand and automotive production, has a strong automotive industry with a modern and diversified supplier network. A new opportunity to develop further has arisen after Ford’s takeover of the Daewoo Craiova plant. The Romanian automotive sector has known an important development during 2001-2007, mainly due to Renault’s involvement at Dacia and its suppliers’ investments. Romania manufactured the equivalent of 1.1 million vehicles in 2011. The Romanian automotive industry employs approximatively 120,000 people (direct employment only). Even though the labor costs have started to increase, they are still at 1/10 compared to the cost of one labour hour in Western Europe, so Romania continues to be attractive as a foreign investment target.

With Dacia, there exists a local passenger car brand. Dacia was taken over 100% by Renault in 1999. Since then, production capacity was increased and Dacia has been successfully positioned as a low-cost brand within parts of Europe. Until end of 2007, the Korean Car Manufacturer Daewoo Motors has manufacturing a variety of its models in Romania. In March 2008 Ford bought the former Daewoo plant and plans to use Romania as a production base for a low-cost car.

There is a complete disconnect between the automotive industry and the military vehicle sector. S.C. Automecanica Moreni S.A. (a member of PATROMIL) is engaged in the design, development, production, assembling and service for armoured personnel carriers, armored conveyance and anti-terrorist vehicles, mobile kitchens on trailers, pyrotechnical intervention vehicles, and other products with military and civil destination. The Mechanical Factory Bucuresti S.A. (a member of PATROMIL) is engaged in research, design, production, assembling, repairs, modernization and service for heavy armoured vehicles, civil transport equipment, machine and railroad equipment production.

Are you ready for the next deal?

We offer consultancy and brokering services on national and foreign markets for the trade of all the defense military products.

ARMORED INTERNATIONAL provides consultancy and brokering services on national and foreign markets for the trade of all the defense military products.